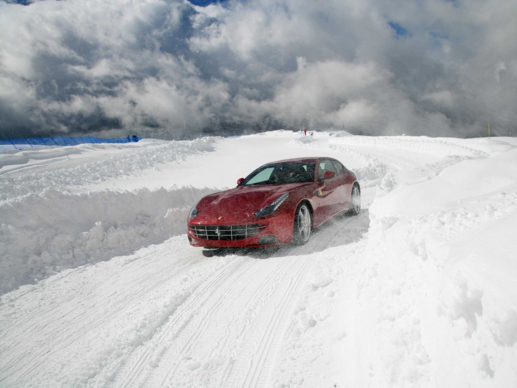 1. Know when NOT even think about driving.

So you've driven in the snow before and you've got a vehicle that can handle bad conditions. Does that mean you can deal with whatever Mother Nature throws at you?

No one should be driving in a blizzard — for two main reasons. First, the simple fact that your car is on the road makes it more difficult for the authorities to clear the streets. If you get stuck, that's obviously a problem for the snow plows.

Second, if you do get stuck, you're an immediate distraction from what the emergency services really need to be doing, which is helping people who weren't stupid enough to take to the roads.

In a genuinely major-league snow storm, you should stay put and leave your vehicle alone, unless there's an absolute emergency.

2. Make sure you have a vehicle that CAN handle the snow.

Contrary to popular opinion, it is possible to manage a rear-wheel-drive car in the snow. You don't need all-wheel-drive or four-wheel-drive. You just need to know what you're doing.

That said, if you've never taken your BMW 3-Series out in snow before, it's best to not test your non-existent skills. You would be better of with a front-wheel-drive car, with the weight of the engine over the drive wheels.

AWD and 4WD are better — but they're also no guarantee that you won't get stuck. Again, how much experience you have is important.

The bottom line is that if you know your car and have dealt with snow before — and you're not in the middle of a blizzard — you're OK. If not, it might be best to take your car out for a bit of practice.

Whether you have a rear-wheel-drive, front-wheel-drive, or AWD or 4WD vehicle, your best hedge against trouble in the snow when driving is snow tires.

You can put all-season tires on your car, but when there's serious snow on the ground, snow tires are your best friend. They're made of different compounds than summer tires, enabling them to maintain traction in the cold. The treads are also designed to deliver better grip and prevent snow and slush from building up on the tires.

Winter tires aren't a failsafe; you can still slip and slide and get stuck with them. But they're designed to deal with snow and in the opinion of many experts, a good call if you live in a region where snows are frequent and heavy.

If you're a leadfoot or heavy on the brakes during normal driving, you need to make a change in snow.

The basic problem with snow driving is one of traction: it's very easy to lose it, and the problem gets worse if ice gets into the picture (snow can actually provide better traction than ice, but ice can hide in plain sight — so-called "black ice" — and be concealed under snow.)

In my experience, the worse is packed snow. In AWD and 4WD vehicles, I've experienced slipping in such conditions. Modern traction control and anti-lock brake won't always help you out, as once a several-thousand-pound vehicle starts sliding, physics takes over.

So when the sliding begins, you don't want to be moving fast. Snow means slow. Don't worry. You'll get there. If you send your car sliding into a ditch, it's going to be a long time before you get out.

On a recent drive, I ran into some snow that at times was coming down hard enough to make me think about pulling over until it let up.

It never got that bad, but if a "white out" had happened, I would have stopped.

This is the Golden Rule of snow driving: pulling over is always better than crashing your car, or contributing to the crash of somebody else's car.

Your car needs to be ready to deal with snow — and that means having the right gear and equipment in your vehicle.

At the very least, you need an ice-scraper. A scraper with a snow brush is better.

It's also a good idea to have something to aid with traction in case you get stuck. A small shovel to dig out your wheels is good, plus some sand or cat litter — those last two are old-time recommendations that can still make a difference.

You should also always set out in the snow with the assumption that you'll have to get out of the vehicle. That means snow-worthy boots, gloves, a warm hat, and a coat.

These days, you also want to make sure you have a phone charger, in the event that your vehicle can't connect with emergency services through its own systems.

Many modern vehicles can tap weather forecasting via their infotainment systems.

This will help you determine whether the snow on your route will get better or worse if you're driving in an actual storm.

Failing that, you can also tune into news and weather sources on the radio.

The age-old advice of "steering into a skip" simply means that if the back end of your car starts to go off on its own, steer the car in that direction. This will help you retain control when traction is restored, rather than worsening things if you fight the skid.

But if all you're doing is slipping or skidding a bit because you hit some slippery snow or lost grip when braking, chances are that the car will re-establish traction on its own.

It's a bit like dealing with turbulence when flying, it will end. On snow-covered roads, traction isn't going to be perfect, so you need to be prepared and relaxed when a little bit of slip develops.

You won't be able to achieve this perfectly, but you must keep your windshield and rear window as clear as possible.

The washers won't always help you here, nor will the defrosters. In fact, wiper fluid will sometimes freeze. Some cars have heated fluid, which is helpful.

But it's no substitute for clearing your windows if they get too icy or snowy when driving. You also need to make sure your windows are clean — as clean as possible under the circumstances — so it's wise to stop periodically if you're taking a longer drive through snow country to give your windows a thorough wipe-down.

10. Up your game with OTHER drivers.

Being a good driver means having strong situational awareness.

It needs to be even better when driving in snow.

You must keep track of who's next to you, who's behind you, and whether they're dealing with snow safely — or dangerously. Give everybody a lot more space.

I also don't recommend using driver-assist features, such as advanced cruise control, in snow. You certainly don't want to do it if you're driving through actual snow, but I say turn it off even when the snow is falling but the roads are relatively clear. Snow and ice can mess with sensors and blind them.

The advantage of a big snowstorm is that it keeps drivers at home and cars in driveways or garages.

But once the roads are plowed and folks dig out, the temptation is to test your driving skills against the elements.

This is risky because snow and ice can mix together on roads, making for treacherous conditions. It also goes without saying there's a wide range of skill levels when it comes to handling winter driving. So by heading out in your car, you expose yourself to a fair amount of danger.